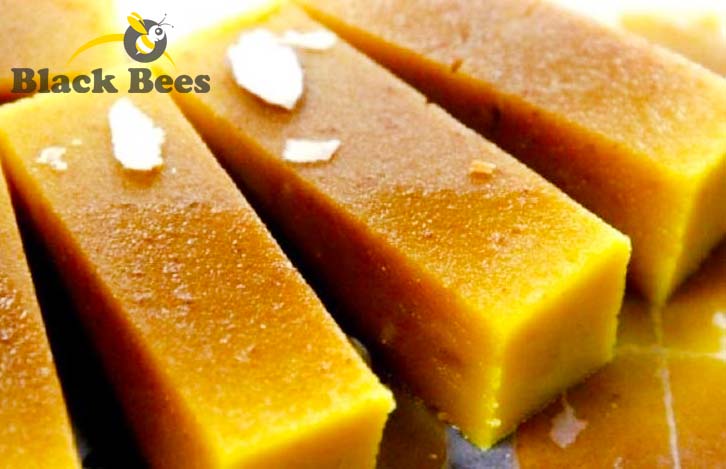 The origin of the dish is credited to his chief chef, Kakasura Madappa, who had not made any dessert. ... This was presented on the royal thali as a hot, fudge-like sweet. The chef was called in and asked what the new dessert was called. He said the first thing that came to his mind - the 'Mysore pak'.

Mysore Pak, which originated in the kitchen of the Mysore Palace flew straight out and became a hot favourite in Karnataka. Mysore Pak, drowned in ghee, sugar and gram flour, melts on the tongue and melts the heart as well. "This girl is like Mysore Pak" (ee hudugi mysore pak thara idale), wondering why this comparison? In the local slang, such cheesy talks happen sometimes comparing the exotic taste of Mysore Pak to a beautiful girl. Do try this sweet in Mysore trip!

The main ingredients required for the preparation of Mysore Pak are gram flour, sugar, clarified butter, refined oil and cardamom powder. A utensil with a heavy bottom is taken and the sugar and water is added and keep stirring continuously till the sugar melts completely. Now the gram flour is taken in another utensil and half the quantity of the refined oil taken is added to this and made into a batter. The ghee is taken in a separate pan and heated so that it melts. After ghee melts add rest of the oil as well. Check the syrup, for this take 1 drop of syrup and place it in a bowl. With the help of forefinger and thumb stick the syrup- if it forms one thread, sugar syrup is ready. The gram flour is added to the syrup and is to be stirred continuously.